This post has nothing really to do with pottery and everything to do with the backyard. And since the backyard plays such a large role in my life I think I'm going to spend some time talking about it. At the beginning of the summer (actually it was still spring and felt a little like winter) we decided to embark on a new project. I have to admit there was a bit of reluctance on the part of the builders but I managed to beg, plead, cry and guilt them into working on this little piece of heaven.
Brian wanted to plant some grapes and grapes need support so naturally we needed to build an arbor with a swing and benches to support those grapes, right? Now when I say we I need to clarify that Brian did not want to be the builder - couldn't someone else do it? Of course and wouldn't the best person to hire be one of my talented brothers? Obviously the answer was yes! Kevin was the MAN! I had an idea of what we wanted and so we got started. The foundation was dug and cement poured in some choice spring weather - I can't remember ever being that wet and muddy. I have to state that I was very helpful digging holes and mixing cement. Then came the shopping (I was helpful there too) and the actual construction (I wasn't so helpful there).
Plans changed because wouldn't it be better if we did this instead of that? Poor Kevin, poor Brian. The redesign added a bit of stress but so worth it! Since we were kind of making it up as we went Brian ended up building more than he initially wanted but he sure looked like he enjoyed doing it so I didn't feel too bad. Kevin, perfectionist that he is, I think liked having someone else to share the stress with. Anyway they worked hard. Kevin put in a lot of hours and yeah! It was built in time for summer parties!
Summer, as you know, is hot and busy. Who wants to stain an arbor in the heat? Not any of us that's for sure. Besides it was time to play too. Finally school started, the weather cooled down and the pressure of fall/winter came. Kevin came again to stain. I finished the staining. Brian finished the last bit of securing the top slats and hallelujah it's finished! It looks beautiful! It's a fabulous addition to the backyard. Nice job Kevin and Brian! 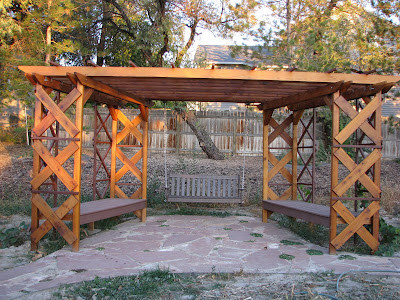 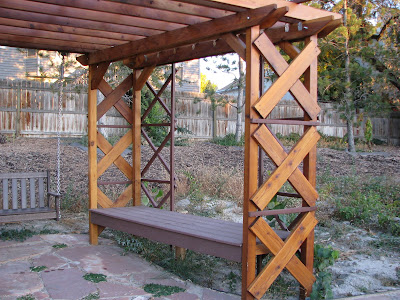 I LOVE IT... one day I WILL talk kevin into building me one, even if he thinks not :> So glad you posted pics

I missed your house this summer!! This looks awesome. I'll have to come see it when the snow clears. Beautiful addition.