Now that is a tomato!

For those of you that have seen our garden you know that Brian is a fantastic gardener. It's a big garden and a ton of work.  He does the majority of it. The girls were great weeders this summer but by August we were all weeded out. No one had any desire to spend their free time pulling weeds. Not to say there weren't plenty of weeds to pull. In fact, it was a jungle out there but so be it. I took these photos in the middle of July before we went on vacation. 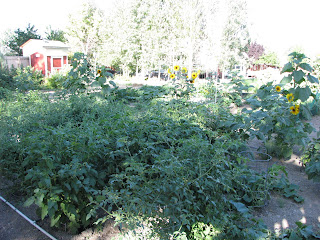 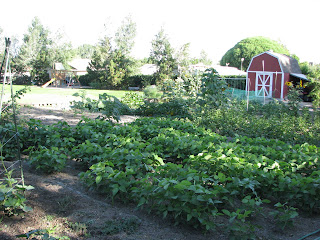 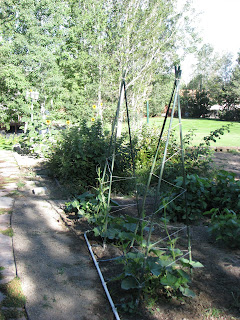 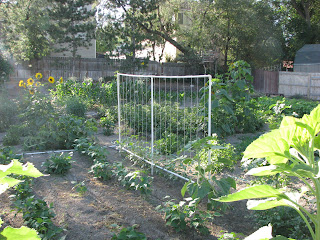 I'm usually in charge of the tomatoes. It's my job to look out for them since I love to eat them & Brian only wants them for salsa. Most of the time I farm out the harvesting job to the girls. I'm not a big fan of bugs or of sticking my hand in a place where bugs might be. When we came home from vacation, girl's camp and 5 full days of swim meets it felt as if the garden had exploded. All the plants were big, healthy and full of food. The weeds were just as healthy as the plants but we just ignored them. I grow heirloom tomatoes and the plants were enormous! I really have to rethink how much space to give them next year. I could also prune them back more often.  This year there was no getting to the middle of the plants, too many vines and bulk around the plants. It was a very successful tomato year. Too much so. Pay attention for next year; when we say come and get some produce, we mean it!

UEA break was the perfect time for us to clean out the garden. My job was the tomatoes (of course). The plants required being cut with tree pruners in order to get to the cages. The amount of tomatoes I found was unbelievable. It just about broke my heart to see all the tomatoes in the middle of the plants. There were literally hundreds. Most of them were inedible because of the frost the past few nights. There were a few keepers though. 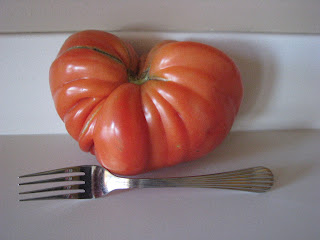 This picture does not do this tomato justice. I couldn't believe the size of this thing! It had 2 others next to it almost as large. This baby weighed 1.848 lbs. That dinner fork has it work cut out for it. I'm definitely saving the seeds from this one!
Posted by Denice at 5:49 PM