Ending on a high note

Country club swim conference championships were this past week.  July 30-31 to be exact. The girls love conference. I used to think it was the longest event ever. Then we got involved with USA swimming and  I realized that other swim meets were even longer - much longer. Not that long is a bad thing, it's just, you know, long. Anyway long swim meets are not the point of this post. The point is it was conference, we went, the girls all competed, we (the team, not us in particular) won, and now it's over. Not just conference is over, but summer swim is over. No more getting up at 6:20 am to have a bite to eat and get to the pool by 7:00 am. No swimming for 2 hours followed by an hour of dry land training. No more dual swim meets out in the summer sun. No more timing the meets, announcing at the meets or having s'mores after the meets. No more worrying about what events they're swimming or worrying if they'll get to swim at conference. No more anxiety over how they will perform or if they will be happy with what they've done. No more yelling "GO! GO! GO!" while they race (as if they could even hear that while under water). No more reminders about eating, or getting enough sleep or drinking enough water. Nope, we are all done. No more summer swim until next summer. Except - and this is a BIG except - Sam is really done. This was her last country club swim season. She will be too old next summer because (I can't believe this) she is growing up and graduating from high school next summer. For the past 7 years we have participated in summer swim. It has been so great for the girls. They have had a blast. They have worked harder than they have wanted to and they have made great friends. This summer has been crazy with the number of times they have hung out with LC. That is what they call their swim friends. (LC stands for Life Centre Athletic Club which is where they swim.) 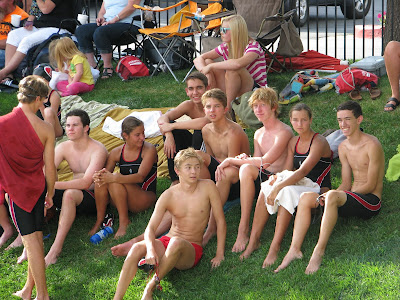 There are girls on the team too. I'm just not sure where they are when I've got my camera out. 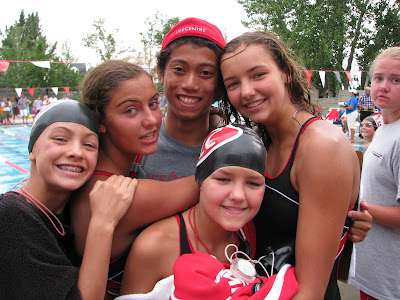 Jeppeson was too old to swim this year so he helped coach which the girls just loved. 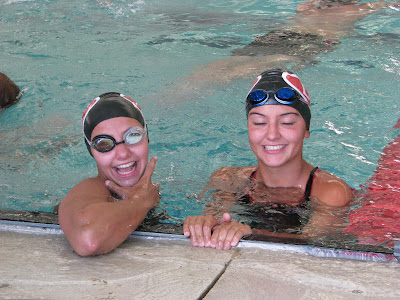 Sydney was sporting some awesome goggles at conference. 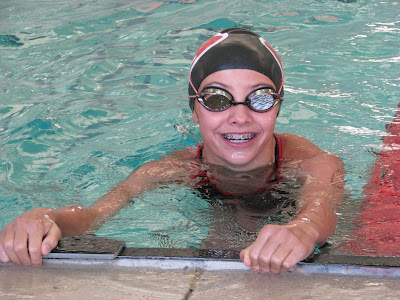 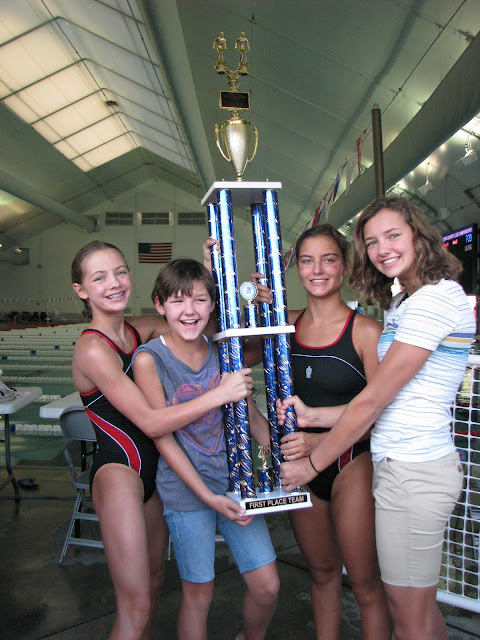 The team came in first place this year. So exciting! The LC has had a team for 7 years and this is the first time they've won. Each of our girls swam individual events with Gretchen and Sydney swimming in relays also. Every event in which the girls swam they dropped time. They worked so hard for their team and for themselves. It was very gratifying to see them do better than they had before. If you were to ask me now how much time they dropped or what place they came in I wouldn't be able to tell you. It's not something I choose to remember. They are aware of how they are doing. I will look at the heat sheets the day of the meet and see what their seed times are & promptly forget. Then I have to look again when they finish a race to see how they did against themselves. And then I forget again. So I can tell you they did awesome at conference since they are happy with their times but I'd have to look up the meet times to give you specifics. 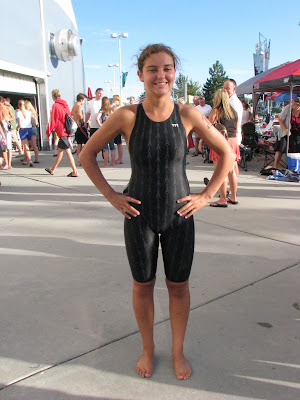 I can tell you about Sam's 100 yard butterfly race though. I can barely type this without tearing up because she was so amazing. When we found out she that she would be swimming the 100 breaststroke and the 100 fly at conference we were thrilled that she would be swimming. It would have been heartbreaking for her to not be able to compete in her final swim conference. She wasn't excited about doing the fly, it's super painful and not her favorite stroke.  She swam the breast the first day, dropped time in the prelims, qualified for the A final, swam in the finals that night and was happy with how she did. The 2nd day of conference she swam the fly in prelims and dropped 4 seconds. We were so excited, that was a lot of time for her to drop. When we came back for finals that night she spent the whole warm up time working on her butterfly stroke. When it was time for her event her coach reminded her that this would be the last time she ever swam in conference & she could swim it as fast and as hard as she wanted. So she did. She swam in the B final and won her heat. Brian & I were at the edge of the pool along with 2 of her coaches and a few team mates cheering her on while she swam. I didn't realize how much time she had dropped & saw the coaches jumping up and down saying she had dropped 7 seconds! Yay, more cheers, awesome! I thought they meant she had dropped 7 seconds from her seed time before prelims, it wasn't until I looked at the results that I realized she dropped 4 seconds during prelims and another 7 during finals. 11 seconds total. Huge! That was how she finished country club swim. I couldn't sleep that night I was so happy for her. She had decided to swim hard and fast and look what happened!

We all feel doubts about our abilities and when you compete in the same sport as your 3 sisters it's easy to compare how you do against how they do. It's tough to remain positive when you don't see yourself progressing as you want. No amount of cheerleading from others can change how you see yourself; it certainly helps, but ultimately you are the one that decides how you feel and how you act. So the best part of this whole swim thing for me has been watching the girls gain confidence in their own abilities and in themselves. That is hard core, knowing who you are and being confident in that. Julia summed it up best earlier this year when asked why she was so hard core. She responded, "I'm a Hyer, that's what we do."

So great to hear this culmination story! Thanks for sharing, Denice!